Cyclists vs. Motorists: The War on Blame 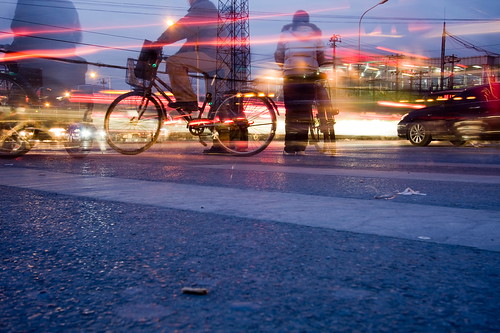 There is a long held dispute between cyclists and motorists about who has right of way on the British highway. Motorists argue that cyclists don’t have to pass a road safety test, or pay any tax to use the road network; cyclists argue that motorists think they own the road and show cyclists little consideration, such as by not giving them sufficient space or cutting them up in an effort to get past. But what are the real issues affecting cyclists and motorists, and how they are being addressed?

During 2012 there were 122 cyclists killed on Britain’s roads as a result of road accidents. This was a 14 percent increase on the previous year and the highest number recorded for five years. Some may argue that it is because cycling has become more popular as a result of numerous campaigns to encourage people to get fit and to use their cars less. Nevertheless, it is still a terrible figure to record.

A number of high profile cyclists have called for a change in the law to make the wearing of cycle helmets compulsory. There are some, however, who oppose this and cite the Netherlands who are renowned for having the safest roads for cyclists. Helmets are neither required by law, nor are they worn by the majority of cyclists there.

Perhaps more importantly, whilst wearing a safety helmet helps reduce the risk of head injury by around 60%, it does not prevent the accident from happening in the first place.

Westminster Council has found that drivers were to blame for 68 percent of accidents last year, while cyclists were to blame in 20 percent of cases. Of the remainder, either both parties were to blame or no cause was known. Amongst the causes of the accidents were drivers not looking properly, driving carelessly or too fast, not correctly judging the speed of the cyclist, and driving too close when overtaking.

According to the Royal Society for the Prevention of Accidents, around 75 percent of serious cycle accidents happen in urban locations, 75 percent occur near or at road junctions, and 80 percent happen during daylight hours.

In December 2012 the Old Bailey cleared a driver of manslaughter after he opened a car door into the path of a cyclist, subsequently causing a fatal accident. The driver could not be charged with dangerous driving as the car was not moving. Whilst opening a door and causing injury is an offence it is only deemed a minor one, and is therefore dealt with by a magistrate’s court and only liable to a fine.

Solutions in Place or Proposed

During recent years a number of measures have been taken to make the roads safer for cyclists, including dedicated cycle lanes, reduced speed limits in urban areas, and the introduction of Trixi mirrors at road junctions to increase visibility of cyclists.

A panel of peers and MPs have published a report called “Get Britain Cycling”, in which they have recommended the government should provide an annual budget of £10 per head for improvements to the infrastructure and safer roads for cyclists. Consequently, changes are proposed in a number of areas, such as planning regulations to ensure that new roads include safe cycling lanes; improvements in training for motorists and cyclists to make both parties safer, more confident and more aware of each other on the road; residential areas to have speed limits of 20 miles an hour; hauliers to ensure lorries are fitted with extra sensors and mirrors, and drivers to receive training in cycle awareness; and heavy goods vehicles to have limited access to built-up areas during rush hour times. The report also called for the appointment of a National Cycling Commissioner to manage the proposed changes.

Inevitably, the use of cars will continue increase alongside the use of bicycles, so it is more important than ever to create an environment that is safe and which encourages courtesy between all road users. Ensuring that the law is clear for both cyclists and motorists, and that it is enforced correctly, is essential for road safety. For students studying a postgraduate law course at university, there are plenty of resources such as the above Get Britain Cycling report and the CTC Cycling Statistics Report, which are readily available online.

James Angle is a law student with a passion for cycling. He enjoys writing in his spare time, as well as rock climbing and a variety of other adventure sports.